This is part four of the Living the Sailing Dream series. Read: part one | part two | part three

We didn’t let the captain drown in a drunken electrocuted stupor so we could commandeer his boat. Instead, Erika and I went about finding our own. 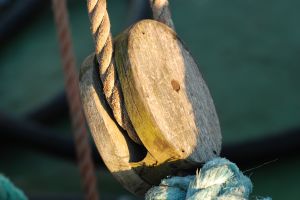 Some people will do anything to find a boat — like camping out in Grandma's retirement community.

The plan was to become bikini clad boat bums working as divemasters wherever we decided to anchor. Ports of call included anywhere in the Bahamas and the Caribbean. We really weren’t picky.

So there we were in Florida, the mecca of boat sales. We rented a car, got the heck out of Clearwater, and made for my grandma’s retirement community in West Palm Beach. Where else would two 20-somethings want to hang out while searching for a boat? But free was free, and Grandma was out of town for a couple of months.

The search began. We didn’t have ready access to computers back then, so we did it the old fashioned way; we looked up boat dealers in the yellow pages and soon found ourselves in the seedy part of town. Immediately a boat broker named Lane, a cross between sunburned Santa and slick sales man, took us under his wing because, “you remind me of my daughters,” he said over and over again.

He introduced us to a sun-bleached 40-foot Hunter about 10 years old. Her name was Tenacity, and I fell in love. I figured with a name like that, she was meant to be mine.

Since I didn’t know much — make that anything — about boats, I was relying on Erika’s knowledge, limited as it was at that point, to get us through. We looked at it like it was a house. After all, that’s what we were going to do — live on it. And after backpacking around the world for the good part of six years, the idea of having my own cabin with a bathroom and a door to close was amazing.

Did we look at the important things like winches, sails, engines, or electronics? Nope. But that was what a surveyor was for. We hired a surveyor, plunked down the security deposit, and began the process to buy her.

The boat inspector did a full once-over the boat, was there for the haulout and didn't find any red flags. But the one thing he didn’t do was haul his butt up the mast. Big mistake.

On a calm, barely breezy day we took the boat out for a sea trial. When we tried to haul up the mainsail, the halyard snapped. “Nothing to worry about girls,” said Lane. “This happens all the time. The lines have just been out in the sun too long.” How long had this boat been sitting on the dock waiting for new owners?

We turned the engine on, or at least tried to. As quickly as the Yanmar diesel engine roared to life, it sputtered and died. So now we were adrift with no sails and no engine (just like Pegasus off the coast of Cuba only weeks before). We called the towboat company, and Tenacity was pitifully hauled back to her slip, forlorn like a scolded puppy that peed on the rug.

“I assure you girls, this can all be taken care of. We’ll get you back out on the boat for a sea trial in no time,” Lane said. We left the docks despondent.

I talked with my cousin, who races on Lake Michigan, and he told me I needed to get an engine compression test. The next day we got a call from the surveyor. He told us the guy in the broker’s office who re-rigged the main halyard called him and said, “Don’t let those girls buy that boat until they have a rigging inspection.” There were numerous cracked swage fittings that connected the standing rigging to the mast. He said, “That mast would have gone over in 15 knots of wind.”

This new revelation scared us. Our lack of boat knowledge became glaringly obvious. We called the broker and told him that we wanted a rigging inspection and an engine compression test. Lane’s fatherly response was, “Oh girls, you are overreacting. The fuel tank was just low, and the engine pulled up some sludge. The main halyard was just old.”

I insisted, and no surprise — the rigging turned out to be bad. We told Lane we wanted it replaced by the owner. Already $1,000 into this project with surveys, haul outs, and now the additional compression test and rigging survey, we started to discuss alternate options.

The first response from the owner was that he was not paying for the rigging. Not acceptable, we said. So we began to look into becoming dive instructors. We were already calling dive schools in Ft. Lauderdale to check into tuition, timing and job placement afterward.

Hours later, the phone rang again. “Okay, the owner would split the bill,” Lane said enthusiastically. No way, we said.

Later, the phone rang a third time, “Great news girls! The owner has agreed to pay for all of it!”

By that point, the rose colored glasses were off, and we realized we needed more experience. We immediately put plan B into operation: Learn a little bit more about boats, then buy one.

In less than two months we both ended up on incredibly different boats just out of dive instructor school. Then the lessons really began.

Living the Sailing Dream, Part One

Living on a Houseboat