Back in early 2004, there was only one thing that got me out of bed every morning: the goal of winning the U.S. Olympic Trials. Most details had been decided years before: the boat was the Yngling, a 21 foot keelboat making its Olympic debut. The location was Miami's Biscayne Bay. And the watershed date was Sunday, February 22, 2004, the final day of the event: only when we knew who won would we know what life would be like on February 23, and beyond. 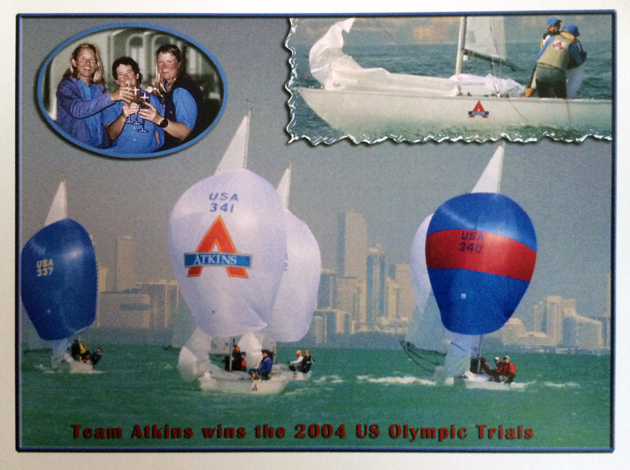 Here's a postcard commemorating our victory (as Team Atkins).

Along with my teammates, Liz Filter and Nancy Haberland, I'd moved to Miami for the winter in order to spend every possible minute training. We'd all put our regular lives at home on hold: jobs, significant others, and (in Liz's case) kids. Our sole focus for three months was to make faster what was, in the big picture, a pretty slow and old-fashioned boat. Our dinner conversations and after-practice debriefs all revolved around minutia: how to shave a microsecond off a mark rounding, how to perfect a spinnaker set. But the big picture formed an easy soundbite: "We're training for the Olympics."

When the ten day, winner-take-all Trials began, we were ready. And though there are many, many, incredible moments frozen in my memory about that intense week, my all-time favorite came on day 3, just after we posted two top finishes in conditions that were not usually our strength. I'd already pointed the bow toward the harbor when Nancy turned back to look at Liz and me, a strange look on her face.

Seven days and twelve races later, we made that prediction come true.

Written by: Carol Cronin
Carol Cronin has published several novels about the Olympics, sailing, hurricanes, time travel, and old schooners. She spends as much time on the water as possible, in a variety of boats, though most have sails.
Advertisement
Boat Reviews

US Olympic Trials: Halfway Through

US Olympic Trials: the Grand Finale