At the Miami International Boat Show Teleflex will introduce the Optimus 360 by Sea Star, a new digital joystick control for boats with outboard motors. The system incorporates a digital helm to power steering, a digital lever control, and a joystick. It can be installed on just about any boat with twin cable-controlled outboard motors, but cannot be used with outboards that come with digital controls. 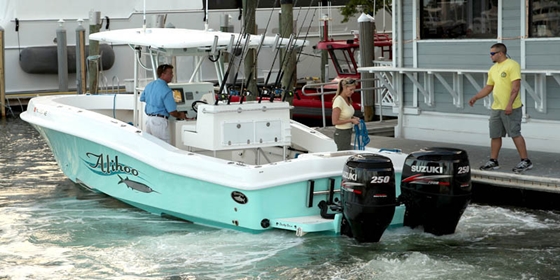 The entire system will cost an eye-popping $17, 995, plus installation. Teleflex is aiming this system at owners of 24- to 35-foot fishing boats rigged with cable-controlled outboards who would like to upgrade their control system without replacing the motors. And right now, this is the only way to get joystick control for outboards.

The Teleflex system has two main components. The first is Optimus Electronic Power Steering (EPS), a speed-sensitive digital helm connected to an ECM (electronic control module) through a CAN Bus line, which in turn controls a pair of new electro-hydraulic Teleflex Smart Cylinders that steer each outboard. There is no tie bar between the motors. Each cylinder incorporates magnetic sensors that monitor the position of the motor through its steering radius. Lock-to-lock travel, steering speed, and steering resistance are all electronically adjustable. The steering system can be installed as a stand-alone component and will cost $6,250.

Optimus 360 adds a digital throttle/shift control and the joystick control to the steering system, and it operates on a separate CAN Bus line to the same ECM. Signals from the controls to the ECM are then sent to actuators that convert the digital signal into physical action, and move throttle and shift cables for each motor. 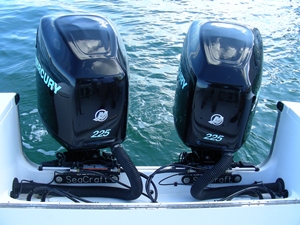 What's wrong with this picture? Nothing. Optimus 360 allows independent engine control via joystick.

I gave Optimus 360 a try aboard a 2005 32 Sea Craft with twin 2005 Mercury Optimax 225 motors, a rig Teleflex found for sale in Florida with only 30 hours on the meter. We used the joystick to ease out of a slip at Sea Isle Marina and then I got to maneuver around for about 15 minutes, approaching a fuel barge in a moderate breeze and slight current. The joystick works as well as any I’ve tried with sterndrive or pod drives. And yes, it will draw this boat perpendicular to its keel – straight sideways – by steering and shifting the motors independently. When I tried that move near a dock and the wind pushed the bow a little to port, I simply gave the joystick a slight twist and the attitude was corrected.

Optimus Electronic Power Steering system will be available for sale in April, and the Optimus 360 will reach the market in June. Each installation needs to be programmed for the boat/motor package, taking into consideration engine power, gear ratio, prop size, motor spacing, and other factors, by plugging some data into the ECM. So it’s a little complicated and will require some training. Teleflex will initially only offer Optimus through three South Florida dealers.

Written by: Charles Plueddeman
Charles Plueddeman is Boats.com's outboard, trailer, and PWC expert. He is a former editor at Boating Magazine and contributor to many national publications since 1986.
Advertisement
NEWS AND EVENTS

BRP Rolls Out a Joystick Control for V6 Evinrude Outboards